The need for safe space

I took part in a virtual conference last week – Creating Safe Spaces – alongside Ashton Hewitt, one of the most exciting players in Welsh rugby who I’m proud to work with at Dragons, where I coach on mental skills and leadership.

Be the Ripple’s Creating Safe Spaces conferenceAshton is standing out as someone making huge efforts to combat racism, something he’s experienced throughout his life.

This inspiring conference, hosted by Be The Ripple, focused on creating safe spaces in organisations, where people are safe to speak up without fear of retribution. At Dragons Rugby, I’m part of the building of a strong culture where having open conversations supports people to be themselves and perform at their best. Ashton is influential in this. Of course, we are proud to have a very social environment built on humour and laughs. Never-ending mickey-taking and ‘banter’ is our norm and we like it like that. But what Ashton is doing so well is using his experience to help educate all of us at the club around bias and issues of stereotyping within this environment and to better understand racism in society.

The paradox of banter

Themes and stories shared by the inspiring conference speakers touched on workplace harassment, speaking up in an organisation without safe space, and how powerful vulnerability can be when modelling speaking openly. 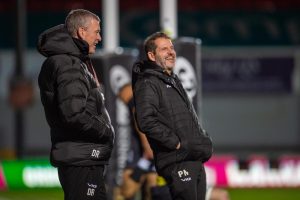 It got me thinking. I really enjoy the culture of a sport environment like the one at Dragons, it’s one full of jokes, quips and banter. Because these things are very instinctive, they will leak biases and people will sometimes get it wrong. People need to be allowed to be both okay and not okay with banter, and know that it can be challenged.

In business contexts, we’ve recently seen some high profile leaders lose their job over something they intended as a joke, or a misplaced comment.  At Dragons, our culture means if you get it wrong, we’ll challenge it, have the conversation and come out wiser. It’s about failing fast with the consequence being about learning – it’s okay to get it wrong once, but not time and time again.

A space to be who you are

There is a challenge around maintaining what’s special about a highly social environment like this that thrives on good-old-fashioned humour while creating a safe space that isn’t so sanitised that people feel scared to make a joke.

Ashton has spoken freely about feeling uncomfortable wearing what he wants to wear for fear it might trigger a stereotypical comment linked to drugs and guns. This instinctive ‘banter’ is the route of the problem because it’s driven by a bias that can show up in some parts of society as something more serious – an unwarranted ‘stop and search’, or worse.

The unintended consequence of a comment about Ashton’s clothing is that he might choose not to wear what he wants to wear, and in doing so not feel able to be who he wants to be and perform as well as he could perform. The space needs to feel safe.

A psychologically safe environment is the best kind for encouraging high performance. It’s one built on trust where people feel safe to take risks and show vulnerability (Michaela covered this in a blog following a recent Leading Edge Performance Hub event).

Dragons is one of the most inclusive environments I’ve been in, and part of my role is to continue to develop this trusting, supportive and proactive culture that encourages people to show up and be themselves. A culture like this not only helps Ashton to be who he is, but also makes him feel comfortable enough to stand up to comments touching on ‘racist banter’ and address them in a positive way that educates and helps people to develop their awareness. Being in an environment like this also made it easier, recently, for everyone to have an honest discussion about taking a knee, with Ashton being in a safe space to explain the symbolism and everyone feeling that it was their individual choice.

I touched on the point of avoiding a ‘too-sanitised’ environment earlier, and this is something that businesses need to have on their radar. In their big wish to be more inclusive (where the stakes are incredibly high if it goes wrong), companies need to watch out for driving a behaviour where people are uncomfortable in a sociable, friendship-led culture for fear of a joke being misinterpreted.

Banter and mickey-taking are a special and fun part of a rugby environment, and at Dragons we have a strong intent to ensure this is a safe environment for all (we don’t always get it right but we are open to challenge it and learn). Ashton highlights three areas in particular as having made the difference:

These approaches are as relevant in business as they are in rugby. How do you build that good-humoured culture and environment where people can have a joke while, at the same time, being held accountable for the things they joke on? It’s a balance – and one that’s gaining importance as companies work to create safe spaces where people can thrive being who they are.

Engaging with the change resistors