So Doctor Who is female.  And the twittersphere is having a meltdown.  For every tweet hailing the break through in the glass ceiling that is Jodie Whittaker’s appointment as the 13th TimeLord, there’s an equally vocal tweet from traditionalist ‘Whovians’ determined to vent their anger in ‘Why oh Why BBC…?’ style

And the rest of us look on agog.  Not at the appointment of Jodie (who is a brilliant actress who will more than nail the character IMHO), but at the depth of reaction the news has caused.

To be clear, we’re talking about a fictional character in a long running BBC Sci-fi series.

So what is it about this announcement that has got ‘Richard from York’ so agitated?  And why is the hashtag #boycottdoctorwho trending?

It all comes down to change doesn’t it?

We know the human reaction to change is complex and the change curve* is well known to many of us.  But the Kubler-Ross model has as it’s basis grief.  It’s therefore intrinisically grounded in an aspect of change that many of us miss when looking at the model in other contexts… how IMPORTANT the change is to us.

Bridges Transition Theory is a model we explore with teams and leaders, as it clearly signposts importance of the change as being a determinant in the time taken to transition through the change. 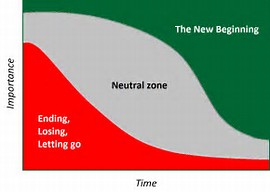 The ‘greater’ your perception of the impact of change, the longer it takes to transition from the Ending zone, through to the Neutral zone, and finally to the New Beginnings.

Of course Doctor Who has changed 11 times previously – the concept of a new TimeLord isn’t new.  Those Whovians who are expressing their displeasure at the announcement (apart from the obvious misogynists who are concerned about the new Doctor’s ability to park the Tardis) are actually clearly and loudly expressing how important any change in the show is to them.

And while some of us may find that level of deemed importance puzzling, I’m sure it’s something that the BBC and the show’s producers will welcome.

Only time will tell.