Fletch played first team rugby for Tynedale, Northampton, Newcastle and Gosforth, and was awarded England honours with A team selection. His impressive coaching career began with Newcastle Falcons, where he joined the Academy staff before becoming the club’s Director of Rugby, with overall responsibility for teams that included Jonny Wilkinson, Matthew Burke, Carl Hayman and Toby Flood.

In his development role with England Rugby, Fletch spent the last 10 years as the Under 18’s Head Coach, mentoring and bringing on England stars through the Performance Player Pathway, including brothers Mako and Billy Vunipola, Owen Farrell, George Ford, Jack Nowell, Elliot Daly and Anthony Watson. 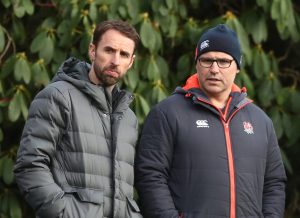 Fletch is a firm believer in how the right learning environment truly supports development, and alongside his rugby coaching roles, he experienced high-performance environments in different sports – observing Nordic skiing, football with Ajax FC and hockey with Dutch clubs – bringing those learnings back into rugby.

Patrick said: “We’re all very excited that Fletch has joined the team. We know he’ll bring invaluable insight and thinking into how we can support individuals and teams, in both sport and business environments. He is renowned for his passionate and encouraging coaching and mentoring style, as well as being an enthusiastic volunteer in sport and the community.”

You can read more about Fletch and our other Team Coaches here: https://www.leading-edge.co.uk/our-team/

This is what Hubert Van Nuvel, HR Director at Levi Strauss & Co took away from his experience with Leading Edge. 🔎
Are you... looking to drive high performance in your team?🔑 Find out how we can help you here – https://bit.ly/3jWfPbu #highperformance #coaching #leadership