“Performance Wellbeing is about creating the conditions for peak performance.”

These words about Performance Wellbeing are from Michaela Weller, Director at Leading Edge, and they resonate so strongly with me. We were chatting ahead of a Leading Edge webinar on the topic last week as I prepared to share my own story throughout my nine years as a professional athlete.

I’m now a Team Coach at Leading Edge and I’m so looking forward to exploring our new Performance Wellbeing model while helping individuals, organisations and teams to maximise performance. 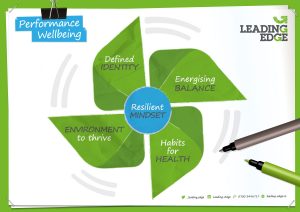 It’s such a perfect fit with my personal and athletics journey to London 2012, and then to Rio 2016, and the impact my own Performance Wellbeing had on my results and outcomes in both these events.

My discipline was Modern Pentathlon, and I’m hugely proud to have won a Silver Medal at London 2012, followed by becoming World Champion in 2014 and taking a World Cup Gold in 2015. Modern Pentathlon always needs a bit of explaining (it’s five sporting events – Fencing, Swimming, Show Jumping, Laser Pistol Shooting and Running – completed in just one day). If you can get a 50% hit rate in Fencing (the first event) then you’re feeling positive about the day ahead. But a lot can change in a very short space of time – it’s a discipline with lots of highs and lows! I talk a bit about my strengths and challenges in each event on the webinar, so if you’re interested, here’s a 20-minute summary.

I was lucky enough to transition from being a university student at Bath to being a full-time athlete, doing what I loved as a job. In the run-up to London 2012, I was part of an amazing machine with the most fantastic facilities at the national training centre that enabled me to train hard and thrive. Team morale was super high, coaches had an open-door policy and we had great communication and camaraderie across the Modern Pentathlon squad.

Only two women and two men could represent the discipline at London, and when it got closer to the Olympics, my Bronze at the World Champs in Rome meant I would definitely be one of those two. While that meant elation for me and one other teammate, it also meant a crushing blow for our other two friends and teammates.

But ‘we’ as a group had a performance target of achieving one medal at London 2012 to ensure funding for four more years… and after a whirlwind experience on 12th August 2012 – proudly wearing the Team GB kit and performing at The Copper Box and the Olympic Pool – I was presented with my Silver Medal in Greenwich Park after the final Laser Run event of the day for Modern Pentathlon. Collective input had created a Silver medallist and we had met our performance target. An amazing day!

Sadly, though, the cracks in our team had already started to appear and I wasn’t prepared for what happened from 13th August 2012. Performance Wellbeing wasn’t talked about – but it was certainly needed. Looking back over those four years from the successes of London 2012 to the disappointment of Rio 2016, there are so many elements – some big, some small – that contributed to my 7th-place finish. Most prominent is that we weren’t the strong team we were before. So much had changed in that time, definitely for me as a new ‘Olympic medallist’ and the expectations that brought, and we hadn’t championed our own Performance Wellbeing or even recognised that it wasn’t present.

Understanding what’s important to people around us

I am so excited to be involved with Leading Edge as a Team Coach and to have this amazing opportunity to inspire people to get on board with Performance Wellbeing as a framework for maximising performance – in sporting and business contexts. This new model is absolutely on point: it has all the components that, looking back, were missing in our run-up to Rio 2016.

When Michaela describes Performance Wellbeing as “creating the conditions for peak performance”, she’s talking about conditions that need to be as individual and unique as we are, and how we all need to make space and time to work out what they are for us!

She went on to explain to me how she knows that her best work is done with a balance of creative input from others, and then space and time to ‘do’ solo. If either of those are out of balance, she feels overwhelmed. She’s definitely a morning lark, too, and knows an exercise class or a couple of miles walking each day really helps her focus.

Our Head of Client Experience at Leading Edge, Victoria Freer-Hewish, expressed the same need for ‘balance’ for her own Performance Wellbeing. When we chatted through what’s important to her, she described needing all the cogs to be turning, and if one gets stuck, needing to address it and level that balance to drive performance moving forward.

Critical for her as well is making time for balance across all key elements in her life – work, home, health and mental wellbeing – each and every day. And how keeping a focus on identity (checking in with ourselves and asking “who am I?”) is so powerful for her, particularly in current times when, for many of us, roles have merged into one.

My own Performance Wellbeing

I’ve naturally been reflecting on why, as a Modern Pentathlon team, we fell short of our Rio target, why we weren’t as proactive and robust as a team. Wellbeing is a difficult feeling or experience to explain (and even more difficult to articulate when it’s personal around your own needs), but I do think if we’d had something like Performance Wellbeing in place, those performances at Rio could have been different. It’s comforting to know that shared ownership policies have now been introduced as the team prepares for Tokyo 2021. I can’t wait to cheer them on.

And I can’t wait to explore Performance Wellbeing with more individuals and organisations with Leading Edge.

Getting the most out of your holiday

Knowing that it matters

The many hats of the manager…. From an employee perspective