We are all living through an unprecedented global experience.  The global pandemic COVID-19, has shifted the landscape and context in which we are operating as organisations, and culturally participating as individuals, for at least the next few months; and with no certainty as to the impact and timescales.

In periods of uncertainty, we naturally look to our leaders –  political, religious, cultural or familial – for guidance and communication. But without past experience to blue print from, what role can we as leaders take?

Leader as Sensemaker is a term introduced by Karl Weick in The Social Psychology of Organizing (1969), and is an core element of our point of view on leadership. Deborah Ancona, in The Handbook for Teaching Leadership (2011), describes Sensemaking  as ‘coming up with a plausible understanding—a map—of a shifting world; testing this map with others through data collection, action, and conversation; and then refining, or abandoning, the map depending on how credible it is.’

I might previously have thought that creating a map needs a detailed understanding of the ‘land’ (landscape) to be able to pinpoint landmarks (key milestones?) and enable individuals to ‘follow the route’.  But Ancona shares this story: 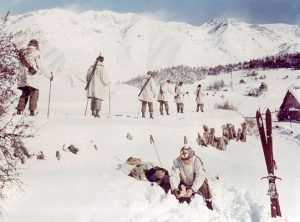 ‘A small military unit was sent on a training mission in the Swiss Alps. They did not know the terrain very well, and suddenly it began to snow. It snowed for two days. There were large drifts everywhere, and it was hard to see through the clouds and blowing snow. The men considered themselves lost. They were cold and hungry, and panic began to spread through the unit as they thought of what would become of them. But then one of them found a map in his pocket. Everyone crowded around trying to figure out where they were and how they could get out. They calmed down, located themselves, and plotted a route back to their base. They pitched camp, lasted out the snowstorm, and moved into action. Of course they didn’t always hit the landmarks they
thought they would, so getting back involved still more sensemaking. They got help from villagers along the way, and shifted their path when faced with obstacles. And then, when they finally got back to base camp, they discovered that the map they had been using was actually a map of the Pyrenees and not the Alps.

The moral of the story? When you’re tired, cold, hungry, and scared, any old map will do ‘

Any old map will do.

As leaders we don’t need to have the answers to every question; we don’t have to profess to be expert in virus control; we don’t have to make false promises about certainty; and overstate our confidence.  As leaders we do need to come up with a ‘map’ for this shifting world, and then communicate and apply this map. Not apply it blindly as ‘the answer’, but to apply it as a starting guide; refining or abandoning it based on our continual collection of data through intentional and authentic communication.

There may not be an existing map, but if as leaders we can create a new map, the one thing that is certain is that we won’t remain in the same place.