(Just) one night in the cold

In the days before I took part in Helping Hands’ Big Sleepout19  last Friday (an annual event to highlight homelessness and raise money to support the charity’s work), friends asked why I was doing it. I think my main answer to that question was “for awareness”, not just awareness of how Helping Hands supports the visible homeless people in Leamington, Warwick and Kenilworth, but awareness of how they build relationships with all kinds of vulnerable people, helping them to a better future. (To be honest, another answer to the question “Why did you take part in the Big Sleepout19?” is because my daughter Aishling was doing it, and she was committed to driving hundreds of miles back to Leamington from a work commitment, sleeping out in the cold on a concrete floor, and then driving back to work the next day! How could I not join her?!) 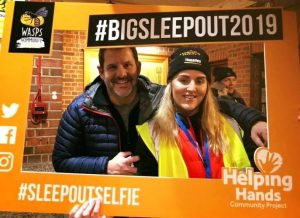 I got to know Helping Hands – their CEO, Lianne Kirkman, in particular – a year or so ago and Leading Edge now supports the charity. To cut a long story short, I knew I wanted to do something to help, and Lianne opened my eyes to the very real problem of homelessness, how it goes much deeper and is much more complex than the visible homeless sleeping in Leamington doorways.

Maslow’s hierarchy of needs is at the very heart of enabling people to move from homelessness to a better future, and Helping Hands has always been so clear on its ethos of “a hand up, not a hand out”. Their regular Soup Kitchen is a lifeline for many. But it’s the work experience they arrange, the House to Home service, and the hugely important practical and emotional support that means they’re helping a whole community of vulnerable people – whether sofa-surfing, fleeing domestic violence or sleeping on the streets – to see a better life ahead.

And that brings me back to the Big Sleepout! Down at Leamington Train Station, there was a feeling of doing something good – it was a celebratory and uplifting atmosphere as 80 or so people found a spot and settled into their sleeping bags for the night. Everyone was in good spirits, music was playing and, if you’ve seen any of the tweets from the night, the support of some Wasps players raised the excitement levels ever so slightly! Leading Edge helped get Wasps and Helping Hands together, and I’m delighted to see how involved they’re getting with the charity, particularly some of the younger players.

It was a lovely moment for me snuggled in a sleeping bag, cuppa in hand, spending time chatting with Aishling, and we were all grateful to Chris and some of the other people who’d previously experienced homelessness for their tips on keeping warm. Commuters arriving back at the station put money in our collecting buckets and wished us all well. Gradually, we dropped off to sleep…

3am: cold, bracing winds, lying on a hard floor, frequent noisy freight trains, wondering whether any rats would try to join me in my sleeping bag – it wasn’t enjoyable. I felt humbled and grateful in equal parts, realising that, in just a few hours, I’d be able to get a warm shower, give my family a big hug and it would all be over. For us at the Big Sleepout, it was just one night out in the cold.

I think most agree that it feels good to do good, and it has definitely felt good to be able to put Helping Hands in touch with some of our fantastic clients and see how we have so much in common. Clients have gone out of their way to match their skills and products with those needed by the charity. I give my sincere thanks to Wickes for completely revamping the Soup Kitchen, to Clarks for much-needed children’s shoes, to Whitbread for taking on the chef’s role in a brilliant ‘kitchen takeover’, and to Wasps for their time and involvement in so many ways.

The Helping Hands Big Sleepout has been going for 4 years. It’s a very visible way for the charity to keep getting the attention it needs, to keep highlighting the complex issues of homelessness, and to keep raising money  so that it can keep changing people’s lives in the amazing way that it does.

If you’re able to donate to support the amazing work of Helping Hands, you can find my fundraising page at: https://mydonate.bt.com/fundraisers/patrickmarr1

Sarah Kelleher is appointed as a Leading Edge Director