I’ve had the tremendous opportunity to really get to know some of England Rugby’s young players in the past two years through a series of off-field development activities that Leading Edge has designed, created and co-ordinated for the RFU. With these character-building activities, we take the players out of their comfort zones to develop their self-awareness, communication and leadership skills.

The most recent activity earlier this month was around the theme of ‘having an opinion’ and we worked with an inner-city London homeless centre. I’ll share some details in a minute, but, before I do, why is having an opinion important for these rugby boys?

These young lads need to develop an ability to be curious and non-judgemental in building an opinion and then become robust and confident in giving their informed view. It’s a balance that can be difficult to achieve – they need to ‘fit in and stand out’. (Leading Edge has been lucky enough to spend time in another high-performance sporting environment recently… with The FA. The phrase ‘fit in and stand out’ was used by one of the participants, and it’s spot-on for describing how these boys needs to approach their role in a team.)

This group of players are likely to have been the best of the best, both at school and in their rugby clubs – they will have been looked up to. Now, in their professional careers, they’re at the bottom of the pecking order, so to speak, and need to become influential, hold an opinion and back up that opinion – whether that’s in a training session when challenging the status quo or in front of camera.

The subject of homelessness was chosen for this activity because it’s a complex issue that splits opinion. It’s very difficult to have one view on homelessness – it is multi-layered.

Partnering with The Passage, which runs London’s largest voluntary sector resource centre for homeless and vulnerable people, we provided a simple framework around the brain’s processes in forming opinions. Here’s the framework before I describe how working with The Passage gave the boys an invaluable opportunity to explore and develop their opinions: 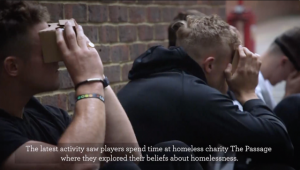 Players experience homelessness through VR headsetsThe boys put on VR headsets for a virtual experience from the viewpoint of someone who’s homeless. This experience through the eyes of a homeless person triggered a reaction in every single one of the lads – the responses were different, but they were all from an emotional viewpoint when ‘experiencing’ this for the first time.

Their red brains would have been in full flow during this time, and then what quickly followed would have been reference to previous experience, blue-brain thoughts: What are my previous thoughts and experiences, if any, about homelessness? How do I respond when I see someone asking for money on the street?

Thinking about current references and viewpoints brings out a desire to engage green brain and gain further viewpoints and clarify opinions.

You can view the video the boys experienced for yourself here

Encouraging green brain through others’ eyes

We followed this activity by providing the players with very intense green-brain experiences in a short space of time.

We went out with the Met Police, in and around one of the most difficult areas of London, and spent time in holding cells. The guys were shocked to see the best part of 100 people queuing at a soup stand – they saw the real diversity of homelessness that night. The police officers out with us gave a balanced view, but it was clear to see they’re in a difficult position and it’s hard not to become cynical when they know some people are probably feeding of the situation and taking advantage of what’s available.

That night provided some different references and different viewpoints – maybe viewpoints that challenged or backed-up the boys’ existing beliefs and values.

The next day, we all had an early start and went out onto the streets with The Passage to identify people who might need to access their resources. It was all about spending time with people, listening to their stories, getting to know them, talking to them about the support available, and preparing and serving food to 120 homeless people at one of the centres. 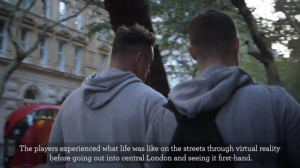 Players working with MET police officers on the streets of London

The Passage Outreach Team guided the boys in how to sensitively approach someone who’s sleeping on the streets, being mindful that they would be, in effect, stepping into someone’s bedroom.

At the centre, the guys needed little encouragement to sit down and listen while people shared their powerful life stories; their route to homelessness. These included one man describing how after time in prison and being in a really bad place, The Passage had hugely helped him – created something better for him – and he now volunteers. Another man’s story strongly challenged the often-held opinion about homeless people that they simply need to try harder to get on in life. He’d been in care since a baby, had a very difficult childhood, was expelled from school and left the care system at 18 with nothing more than the details of a homeless shelter. His story hugely highlighted how a good start in life and family support go such a long way.

It was very difficult to hear a woman describe how she was subjected to ‘corrective rape’ in South Africa. (Corrective rape is a hate crime used to convert lesbians to heterosexuality – an attempt to ‘cure’ them of being homosexual.) She talked in detail about how mental health has played a big part in how she has coped with her life experience. With the mental health support, and other support, she now receives from The Passage, she is more able to cope and is turning her life around. 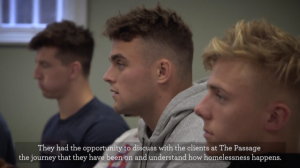 Bringing the development activity back to ‘opinion’, the players were given a heads-up to expect to be filmed for a documentary for which they’d need to articulate and back up an informed opinion on homelessness. (The ‘documentary’ wasn‘t real… which they only discovered at the end!)

There were two scenarios: in one, the players were on one side of a discussion panel with homelessness experts on the other, and the second required them to interview an opinionated MP who tried hard to twist their words. Both scenarios put the lads under pressure to give a well-formed opinion and hold it when challenged.

They then received guidance from a media trainer, who focused on the ABC approach: acknowledge and answer the question, bridge between your answer and your key messages, communicate and conclude and your message with your key lines and proof points.

Opinion in sport and business

As England Rugby’s next generation progress through their careers and reach the heady heights of international stardom, they’ll continually need to articulate and support a well-formed opinion. And they’ll also find their opinions change and evolve as they’re exposed to other people’s opinions – and sometimes have their own challenged.

As I mentioned at the start, Leading Edge has worked with England Rugby’s next generation for two years now, designing, creating and co-ordinating six of these development activities. And we’re excited to be starting to plan how to keep building character as we go into year three…

The many hats of the manager…. From an employee perspective

14 days to develop yourself.. the Retail Investment challenge