The need to ‘Embrace Paradox’ may seem a profound thing to say, particularly in the context leadership where we are often looking for clarity. 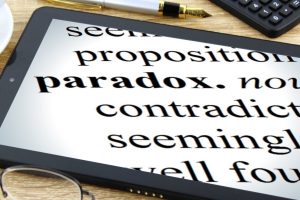 At Leading Edge we see the ability to entertain and ‘Embrace Paradox’ as a key early tenant of being a good leader.

Without paradox we risk singularity…

The danger of ‘Singularity’

If we fall into the trap of singularity, so not embracing paradox or even entertaining the value of paradoxical situations we risk seeing the world through one single lens. One single perspective, therefore possibly one single answer or solution to a problem, one way to overcome a challenge.

This perspective of singularity occurs where leaders (and teams):

What if we are wrong about our ‘one answer’ and have invested in this path with time, energy and assets? Where next…

Do we start again with the same desire for one answer (singularity)? If so the cycle continues…

In his book Do The KIND Thing*, Daniel Lubetzky calls this The AND philosophy.  “it’s about learning to think critically, frequently pursuing what in the short term may seem a tougher path.”

He describes “if an effort to become efficient, your brain has a tendency to accept prevailing ideas or concepts  that may no longer be correct (or may never have been) These shortcuts.. (heuristics)…. enable us to process information and reach conclusions swiftly.  But they also bias us in favour of quick solutions that many not maximise our long-term potential.”

Duality and all that it brings

To be in duality is to perceive, see, hold (perhaps even feel the emotion of) opposing views. Duality sees life in colour (diversity). Duality creates space for us to analyse, describe and discern. It helps us to categorise (that which may work and that which may not), duality is inquisitive about more, it wants to know the possible and possibilities.

Taking this approach may be time consuming in the early phase of project delivery, but it has the power to save time, money and assets in the long run. And if the extended early investment is qualifiedly less than the risk of failure then perhaps its worth embracing.

The Paradoxical Situations We May Encounter

Situation: The more I learn the less I realise that I am aware of

Response: Simply learn what you need to right now (some is better than none)

Situation: I need to be strategic, and know enough of the detail to ensure success

Response: Allocate time to the appropriate amounts of both, often less is more, use your time wisely to rethink your approach

Situation: The more I push the harder it is to go forward

Response: Step back, ask yourself is there a different entry point or influencer

Situation: The more I convince the less they are convinced

Response: Listen to their story and respond to their words rather than re-share yours

Situation: I need to be strategic, and know enough of the detail to ensure success

Response: Allocate time to the appropriate amounts of both, often less is more, use your time wisely to rethink your approach . 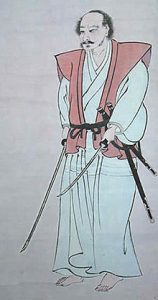 His legendary prowess, which enabled him to come unscathed through countless duels with other Samurai, was based on a “double gaze”; one eye on the immediate situation (the opponent) and the other on the bigger picture (the state of play on the wider battlefield).

The key to success, as Musashi demonstrated, is the ability to switch constantly between the two. There’s no point focusing on details of execution if you haven’t got a clear sense of overall strategy – and vice versa.

How do you manage yourself and lead teams when the seemingly wrong may be right?

A strategy to be SURE you are on the right path:

E – Evaluate and decide – Consolidate what you know and take action

It has been said that the best thinkers are those with the ability to hold opposing ideas in the mind at the same time and still function effectively.

“In any given form of opposites or duality, the one that is judged inferior or lesser is the one that rules. When both sets of opposites are recognised and given equal value, the neurosis dies, not as a soldier dies in battle, but as a seed dies when it breaks its skin and opens up to a new form of life”

The Alchemy of Opposites by Rodolfo Scarfalloto (1997)

(Should you wish to explore this area more, perhaps take a look at ‘cognitive dissonance’ and the tension between singularity and duality.)