For organisations embarking on a change programme, it’s the perfect time of year to introduce an approach for busting unhelpful beliefs that create resistance to change.  All thanks to Father Christmas!

At a client conference last week, Patrick Marr (Leading Edge, Owner Director) introduced the group of 120 leaders to a process what will enable them to challenge beliefs about the business that are holding them back.

So where does Father Christmas come in?  Remember as a child the belief you had that he was real?  This belief is like the table top and you probably had evidence (table legs) that held this belief up.  He left you presents, everyone told you he was real and you might have seen him outside the supermarket before Xmas…but remember when that belief was shattered?  Chances are new evidence came to light.  Maybe a school friend told you it was your parents?  Or you woke up and saw your parents placing presents in your stocking?  All of a sudden, the foundation for your belief in Father Christmas has been shaken and you probably start to question the other evidence you had. 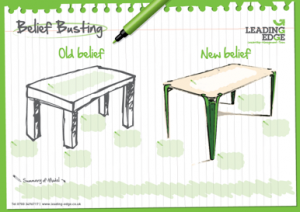 This group of leaders identified one of their beliefs as being “the business is a big tanker and difficult to turn” and sure enough they had evidence for this.  However, with a bit of rocking of the table legs e.g. “give me an example of when you have done something quickly”, they quickly identified new evidence to shake the disempowering belief.

So a great process for teams to use to challenge beliefs that are not helping them as a business.  And apologies to anyone whose Father Christmas belief has just been busted!

For more information on how we can support your business on busting beliefs that are creating resistance to change, please call us on +44 (0)700 3496717