I have been really looking forward to this blog and exploring the ‘Change Equation’. (Don’t you just love it when maths enters into the world of organisational and people development?!)  We recognise that ‘meaningful’ change is more complex than a maths question, however the Change Equation (defined through the work of Beckhard and latterly Dannemiller) give us a great methodology to explore the extent to which people, teams and organisations are in a position for/to change.

In our previous blog ‘reactions to change’ we recognised that change is constant (‘life is flux’), so why do some find themselves clinging to the now, like glue binding us to people, objects, processes, systems or situations that no longer serve us?

The premise being that, successful organisational (or individual) change is only possible when the product of D, V and F, is greater than the resistance to change.

Keeping things all mathematical, lets imagine D = Dissatisfaction, V = Vision, F = First Steps are all vectors, ‘What’, I here you say. Here’s a simple definition for our context below:

A vector – a quantity having direction as well as magnitude (note – said vector will continue in a given direction until acted upon by and opposing force).

Vector: This vector represents a dissatisfaction with the status quo. The level of dissatisfaction needed to support significant change efforts must be high. This is the motivational factor with in the formula, the desire for change (the WHY).

The opposing force: Satisfaction is the opposing force in this scenario, a happiness with the current context. Note if an employee is happy with their current world, why would they change?

Action: Our role here is to create a willingness for change. Position change as something being done with and not to people, explain the value of change through 3 lenses:

Vector:  this vector represents the need for a compelling Vision regarding a positive future state (internal or organisational) that each individual can paint themselves into. It should represent something people would like to be a part of and want to make happen. A clear and shared illustration of the possible futures (The What)

Opposing Force: The opposing force to vision is confusion. Without clarity there is fog and people find themselves in the wilderness. If they can’t see the path, why would they take it? (there present is a known entity and will stick here).

Action: Build awareness of positive futures which are tangible/concrete, share these directly with people, allow them time to internalise them. Paint a vivid picture of this future and make the path crystal clear.

Vector: The vector of ‘First Steps’ is about making it clear what these look like in the realisation of the vision. There is a need to consider not just the plan for but also the ability of others to take these steps. Create a roadmap of acceptable ‘first steps’ and longer-term actions (The How)

Opposing Force: Our nemesis here is friction, an increasing desire to remain static, particularly if the first step is too big.

Action: show how as a collective the vision will be achieved, the steps, the investment, the impact on peoples now and collective tomorrow. This plan must include the first step and the second song (check out our Dancing Guy Blog).

We find people resist change when: 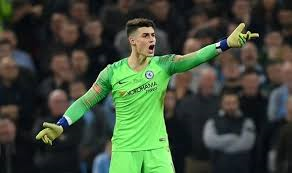 A very recent sporting example played out in the final of the Carabao Cup on Sunday. Chelsea goalkeeper Kepa Arrizabalaga resisted manager Maurizio Sarri’s attempt to substitute him late in extra time of the Carabao Cup final, in extraordinary scenes.

In this situation, we can only guess that  Kepa (goalkeeper) was happy (satisfied) with the situation, he couldn’t see vision for the change, so the first step (to leave the pitch) was too far too dramatic so he showed his resistance.

It is widely acknowledged that the most effective method of supporting change/dealing with resistance is to engage stakeholders in shaping change. So simply ask:

This will give you the insight you need to build commitment for change and gather momentum to shift to new spaces.