The unexpected star of Glastonbury this year was Alex Mann.  The lad from the crowd selected by Dave the rapper to join him on stage for his (apparently regular) audience participation ‘dueting’ to his tune ‘Thiago Silva’

Alex’s amazing rendition of not just the one part lyrics he was asked to deliver, but to both parts has been watched by millions and has become the topic of many a Twitter trend .. Including the hashtag #bemoreAlex 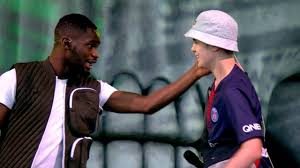 But did you notice the lad just in front of Alex in the crowd?  The lad who thought he was in with a chance to be selected .. But then by a twist of fate, wasn’t? (let’s call him Ned for the purposes of this text .. apologies to him!)  Take another look at the video here.  What lessons can we draw from Alex’s more successful (if not entirely planned) approach and his amazing moment?

Here’s some (slightly tongue in cheek) thoughts from me

I’m sure there’s more comparisons… what did you notice?

Alex’s moment was a triumph.  Maybe we should all have the confidence to #bemoreAlex?