Assumptions and perceptions of Ruiz … the risk of bias

Arguably the sporting shock of the weekend (if not in boxing history) was the knockout defeat of Anthony Joshua in the heavyweight title fight to Andy Ruiz Jr.

Ruiz, in winning his thirty-third professional fight, became the first Mexican heavyweight champion of the world, as Joshua experienced his first defeat.

Ruiz was the underdog – underrated by the media due to his physique and in fact called ‘a fat slob’ by former promoter Bob Arum when the fight was announced.    Ruiz laughed off the comments “All my life everybody has been underestimating me until they see me fight, until they see me knock someone out. Then it’s: ‘Look at this chubby kid go.’ 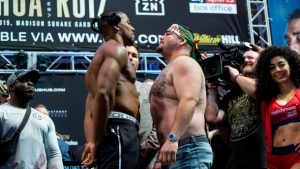 As the old adage goes – ‘don’t judge a book by it’s cover!’  How many of us looked the weigh in pictures and discounted Ruiz as a contender?   When a little bit of googling good old YouTube would have led us to his training camp videos showing awe-inspiring agility and speed.

For many of us that ‘shock defeat’ is a pertinent reminder of the risk of unconscious bias and the judgemental path it can lead us down.

Nobody wants to admit to being biased on first impressions.  By being influenced by physical attributes and our perceptions and expectations of ‘the norm’.   But in the context of pressured and every changing environments, where the need to make decisions come thick and fast, we may be ‘discounting’ individuals with skills, preferences or strengths that we are ‘unable’ to ‘see’ because of a distorted lens of expectation.

Make time to check in on any  ‘lenses’ you may be subconsciously (or consciously) viewing your team or colleagues through.  You may be pleasantly surprised – rather than shocked like Joshua.

Are you the manager or the monkey-carrier?

Women in Leadership Roundtable: Harnessing the Power of Advocacy

Our reputation as 'people-led partners' to elite sports team and global businesses mean that if it matters to you, it matters to ...us💚 Get in touch now, we'd love to chat - https://bit.ly/3wuEs1z #highperformance #clients #coaching #leadership

We know becoming a leader is tough, here's one of our top tips to help.💡
We are experts in shifting the mindset, skill and ...behaviour of people. Take a look at how we can help you here: https://bit.ly/3jYQuxI #leadershipadvice #leadership #performance #coaching